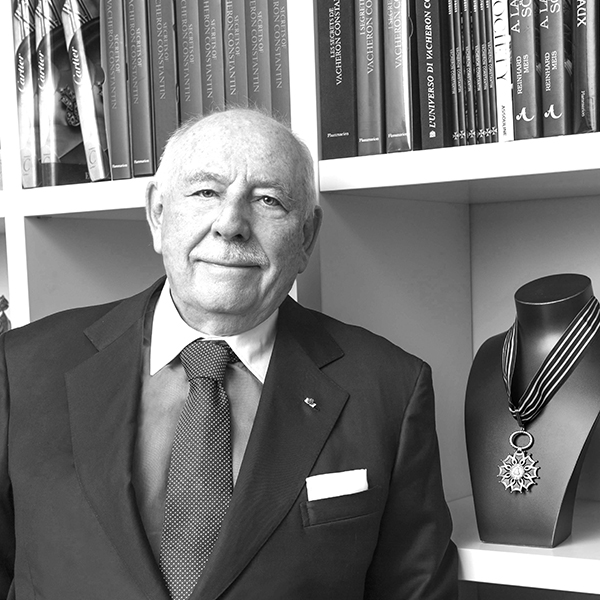 PRESIDENT OF THE COLOGNI FOUNDATION OF ART CRAFTS

“The restorer’s gesture is a gesture that gives new life, and that infuses new energy into the contemporary: an energy that neither falsifies nor betrays the work, but on the contrary brings it back to that state of ‘authenticity’ that the artist has desired and obtained. From the concurrence of many points of view, that of the artist, the curator, the collector, the restorer, the centrality of a dialogue woven around the material is strongly reborn, on which the creative gesture has imprinted a form destined to leave its mark: a form that the artist has created, but that the master craftsman (scientist and researcher, technician and interpreter, often cultural mediator) with his skills preserves, restores, reactivates. Demonstrating that true contemporaneity lies precisely in the ability to weave a relationship that reveals the natural beauty of the idea, through interventions that are really necessary and fully shared by the artist, the leading actor in this scenario.”

The Cologni Foundation for Art Professions is a private non-profit institution, founded in Milan in 1995 by Franco Cologni, its President. Its initiatives, aimed at a “new Renaissance” of the art professions, are addressed above all to young people: training new generations of Art Masters, saving the artisan activities of excellence from the risk of disappearance that threatens them, is in fact one of the objectives that the Foundation pursues. To this end, it promotes, supports and implements a series of cultural, scientific and popular initiatives.
With the editorial series “Mestieri d’Arte” and “Ricerche”, published by Marsilio Editori, it aims to historically reconstruct the reality of these excellent activities up to the present day, looking at the great tradition of Italian savoir-faire and together with the new variations of contemporary craftsmanship.
With the “Storietalentuose” series for children, published by Carthusia, he wants to make the Italian professions and crafts of art known and loved by children.
He conceived and created the magazine “Mestieri d’Arte & Design. Crafts Culture “, dedicated to the excellence of Made in Italy and the masters of art who in Italy and around the world hand down” the intelligence of the hand “.
With the internships of the project «A School, a Job. Paths of excellence “actively supports the training of young people in high craftsmanship and their integration into the world of work.
As part of its training and orientation activities, the Foundation actively collaborates with high-profile schools and institutes, including Bocconi University, Catholic University, Milan Polytechnic, Creative Academy, Domus Academy, EDC (Paris).

We use cookies to personalize and offer the contents that are shown to you, in order to guarantee you the best possible experience.Read more
Accept allOnly necessariesPreferences Deny
Manage Consent

This website uses cookies to improve your experience while you navigate through the website. Out of these, the cookies that are categorized as necessary are stored on your browser as they are essential for the working of basic functionalities of the website. We also use third-party cookies that help us analyze and understand how you use this website. These cookies will be stored in your browser only with your consent. You also have the option to opt-out of these cookies. But opting out of some of these cookies may affect your browsing experience.
Necessary Always Enabled
Necessary cookies are absolutely essential for the website to function properly. These cookies ensure basic functionalities and security features of the website, anonymously.
Functional
Functional cookies help to perform certain functionalities like sharing the content of the website on social media platforms, collect feedbacks, and other third-party features.
Analytics
Analytical cookies are used to understand how visitors interact with the website. These cookies help provide information on metrics the number of visitors, bounce rate, traffic source, etc.
Performance
Performance cookies are used to understand and analyze the key performance indexes of the website which helps in delivering a better user experience for the visitors.
Advertisement
I cookie pubblicitari vengono utilizzati per fornire ai visitatori annunci e campagne di marketing pertinenti. Questi cookie tengono traccia dei visitatori sui siti Web e raccolgono informazioni per fornire annunci personalizzati.
Others
Other uncategorized cookies are those that are being analyzed and have not been classified into a category as yet.